In AfricanFeminism’s (AF) ongoing featuring of Inspiring African Feminists, as part of our HERStories series, we feature Scheaffer Okore from Kenya. Scheaffer is the Vice chairperson of Ukweli Party and head of programs for civic engagement at Siasa place. She holds a Bachelor’s degree in International Relations and Diplomacy from the University of Nairobi. 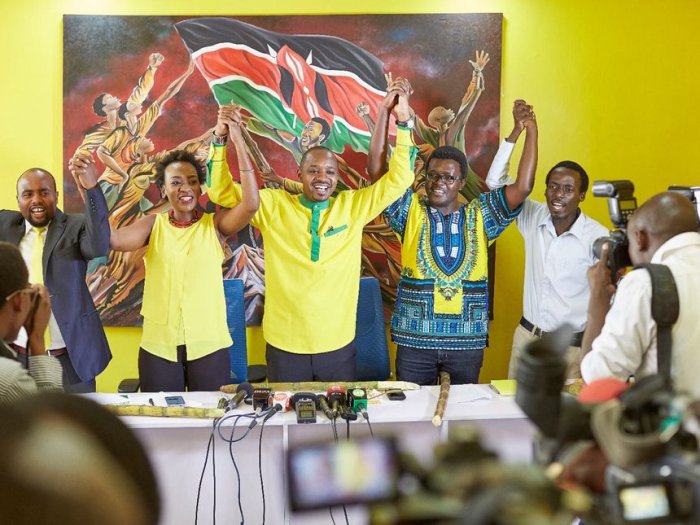 AF: What has contributed to your understanding of feminism and what does it mean to you?

SO: Being raised by women who didn’t know what feminism was/is but still existing in every feministic aspect craving freedom of being and fighting for it. Feminism to me, means humanization of women without negotiations.

AF: How has your feminism shaped the work you do? Particularly your participation in Kenyan politics as the Vice Chairperson of Ukweli party?

SO: Feminism gave my work a lot of clarity, grounding and purpose. I knew I always wanted to be a voice for the many injustices around me that were happening without anyone saying much about it. So, I set out to say it and feminism made me realize I wasn’t insane for wanting to speak. It affirmed me. My work at Ukweli Party is centered on building a political institution that doesn’t downplay the role of women in politics, harnessing the scattered voices of women and becoming actual alternatives.

AF: What issues do you think Kenyan Feminists have successfully advocated for? What is current and critical? What is required in advocating for said issues?

SO: Kenyan feminists have successfully created an organically growing space for unlearning patriarchy on and offline, which is so grand, as honest conversations are the genesis of true change. Current and critical is demystifying the notion that feminism is an elitist foreign ideology when women like my grandmother “The Oracle” were feminists without any text. It’s still a struggle around attitude and the ill perceptions around feminist practicing women. We require to constantly teach more to ourselves and others in honesty that feminism wants all of us women people to be seen and to be safe even in visibility. No hierarchies or borrowed privileges.

AF: How does the work you are engaged in currently contribute to that?

SO: My work currently is demonstrating that ordinary women people matter in spaces of politics through my representation and doing a lot of hand holding, teaching and supporting more women to pursue active political participation.

AF: What type of backlash have you faced for your feminist activism and how do you respond?

SO: My major backlash was the constant rejection because the world labelled me disruptive and at some point, in my life I felt so alone because of it. This is why it’s vital to have human anchors; it’s easy to sink and lose focus hence my commitment to anchor other women today fighting the fight. I’ve learnt to pick my fights and not everything is worth a response or a reaction.

AF: Can you share with us a little about your journey in the space of politics? What have been triumphs? And what have been challenges?

SO: To be honest, politics had been choosing me for a while and I kept rejecting it. Somehow everything I was doing was around political consciousness, active citizen participation, social justice, etc, which broadly involve political processes. But I didn’t want to do mainstream political work or the identity. It seemed such an unpalatable field. I hated so much about what politics represents in Kenya – elitist humans with power to do whatever without consequence. I didn’t want to be them or ranked anywhere near them. So, I kept running and excusing the role. When Ukweli Party happened, I couldn’t say no anymore. I had run out of excuses and I was also very tired of demanding for good leadership alone. So, I said yes with so much doubt in my heart, so many questions and so much fear of failure. Even today I’m still anxious and something in the pit of my stomach pulls my insides when I remember what I’m doing but this is also my litmus test for anything I’ve done that turned out great. “If it doesn’t scare me I don’t do it because I won’t put effort in it.” Basically, I detest comfort and Ukweli Party makes me uncomfortable, pushes me out of myself and sometimes it’s the reminder of why I have been pushing for so long. I love it.

Triumphs: We won the battle around what true alternative political party/politicians should look like and did the excruciating work of talking to people one at a time selling our ideals. We set out to start from scratch and have managed to do that by literally going out to the people and asking them to believe and support us. People gave us overwhelming support which I can never fail to acknowledge and appreciate. every one of them believed in us-unknown ambitious young people with nothing to give but ourselves- isn’t that something hopeful?

Challenges were around getting the party officially registered; it took three years to get our certificate, raising money to fund candidates, setting up an office, getting brave people to join the party as candidates, fighting for visibility, and gaining people’s trust and a lot of back breaking work among a small team which even today remains a struggle.

AF: What has been the most important lesson you’ve learned that young aspiring female politicians should know?

SO: Walk into it as yourself – no masks or any performances – or else everything you will go through which is a lot, will definitely change you and for the worst. Yet the greatest element of a politician is authenticity. Be who you are, leadership is easier when it’s done in truth.

SO: More women in politics because politics operates on people’s silently captured participation, especially women. I am advocating for more feminist oriented women to be in political spaces. Feminist practicing women understand the importance of doing actual work to build women up in spaces that will thrive them and wont engage in tokenistic work. These are women who won’t only break the glass ceiling but will clear the shattered glass so those women coming after them aren’t cut from the sharp edges. They find peace in seeing more women try, they don’t judge failure, they protect the small space that exists for women and fight for more. I need more of these women in such a space to be able to shift conversations, participation and redefine leadership.

AF: What do you consider are key pan-African feminist issues that existing and aspiring female politicians should be addressing currently?

SO: Pan Africanism was essentially supposed to strengthen the bond among African people and create unity. However, how are people supposed to unite if women aren’t yet seen as fully people/humans? This means, even on a continental level, women are still very intentionally made vulnerable and heavily marginalized. Female politicians must come to the understanding that Pan Africanism cannot be fully achieved in dominant patriarchal spaces. Dismantling the patriarchy and its complex power matrix is something they should all be very keen on because its hindrances are too grave.

AF: What does a pan-African feminist utopia look like?

SO: It’s like a web where all languages, cultures, tones, sizes, religions, sexual orientation, ages and different classes of feminists, women all fit in as one. An intricate and delicately woven web with a singularity of agenda. A pan African feminist utopia is going beyond being your sister’s keeper and knowing that you are your sister; what happens to her happens to you; it’s the unanimity in which there’s refusal to negotiate women’s lives.