Last week, the second annual Uganda Social Media conference was held in Kampala. The conference hosted by Konrad-Adenauer-Stiftung brought together Ugandans active online to discuss the impact of social media on the political and social landscape in Uganda.

Out of estimated 35 million Ugandans, only 2.5 million are on social media but more Ugandans will be online as access to broadband improves and costs of internet go down in the coming years.While a greater part of the conference looked into the increasing curtailing of freedom of expression and Netfreedom in Uganda, of particular interest to me was a panel and debate around women online.

Opening of the Uganda Social Media Conference on July 19. Photo by @KasUganda

In sub-Saharan Africa, this gender gap is a real challenge where there are fewer women and girls online than men and boys – in some cases the difference is over 40%. According to the Web Foundation’s 2015 global report on Women’s Rights Online (WRO), women are almost twice more likely than men to report lack of skills as one of the main barriers to Internet use. While Godiva Akullo, a feminist lawyer says social media has “democratised information giving women a deeper consciousness as women and citizens of the world”, the number of women engaged online are still fewer.

Dr Sarah Ssali from the Makerere University School of Gender and Women Studies emphasised the safety of women online and how it pushes women off even those few that have access online. Indeed more women are in private messaging groups like WhatsApp than on open social networks because of aggressiveness online on these platforms. Cyberbullying is a reality and the increasing targeting of women in revenge pornography forces many women to stay inactive.

Women are playing it safe online. They are not getting deep into women’s issues. We need to see conversations elevated,” said Ssali.

Goretti Amuriat from the Women of Uganda Network told the conference that “the majority of women using social media have experienced violence online,” adding that other barriers limiting women’s access to social media in Uganda range from illiteracy, time, remoteness, immobility and poverty.

Women's access has been limited due to cost, literacy and violent structures. #UgandaSocialMedia https://t.co/DXoUrOfiss

Akullo says many women end up self censoring on social media spaces in order to avoid backlash. She says mindsets need to change.But what happens online is just a reflection and extension of what happens offline so the sexism, bullying and misogynism online a reflection of the work that still needs to be done offline. In other cases, there’s still limited understanding that laws and rights offline do apply online. Internet sort of gives a cover for predators to send messages that they wouldn’t easily do in real life. While anonymity can be a good thing allowing women to break barriers and taboos to engage in online debate, it also gives cover to many who troll and bully women online without repercussions. Like Daniel Kalinaki, Managing Editor for Regional Content at the Nation Media Group emphasised

“online activism must be preceded with offline engagement.”

Nickson Ogwal, Fundraising Director at ActionAid Uganda pointed that the challenge with the dominant social media platforms is they tend to focus on women and their bodies.Probably the most eye-opening statement was that besides the ruling party in Uganda -National Resistance Movement, the most attacked ideas/people online are feminists.

I have met enough young Ugandans who really fully identify as anti-feminist- huge number young male. Often I wonder if they truly understand what they are against. While more and more young women embrace feminism, African feminism still faces an uphill task. We live in interesting times where more women are getting into higher education and formal employment than ever before. Even those in informal employment are getting more financially independent. This means that those raised to link manhood only to power and money are suffering as these foundations crumble. Yet the majority of women are still far from getting their rights or even accessing formal jobs. Many said while they understood the cause of women empowerment they found some women “too feminist”.

There is no such thing as too feminist – @amgodiva #UgandaSocialMedia

The argument that consumed some part of the conversation was, what should come first- empowerment or advocacy for women’s rights? I said they are not mutually exclusive. We can empower women especially to bring more voices online-into the marketplace of ideas and in the end they will be able to stand up for themselves. We must remove all barriers – economical and physical – that keep most women in our continent offline.

The conversation about women and social media in Uganda continued throughout the event and some polls were carried out. Some questions raised were whether we should be getting women to be anonymous to avoid abuse. I say we should be working to remove barriers.

Should women resort to anonymity so as to freely engage online? #UgandaSocialMedia

Over all the conference recognised that social media has had an impact on women’s expression.

Has social media changed the way women express themselves in Uganda? #UgandaSocialMedia

One blogger Rebecca Rwakabukoza tried to break it down for those who still didn’t get what equality on and offline means.

Banange we don't want to be more important than men! We just want to be human also. Why is it so hard? #UgandaSocialMedia

and many reiterated Godiva’s call that women aren’t supposed to fit specific boxes and labels.

And that was a conversation that senior political party official brought to the audience when he suggested women cannot come “from the kitchen to the presidency.”

"The time for lecturing people is over, people want to hear their voice as part of the conversation". Says @j_mucunguzi #UgandaSocialMedia

And like Julius Mucunguzi, a communications advisor in the Prime Minister’s office said the time for lecturing people is over. He might have said this in relation to government-citizen relations and how they are being changed by social media but the same can be said of feminism. That the time for lecturing women is over. Women are fully online and telling their stories. Even the few voices have made a huge in difference in challenging stereotypes and creating room for conversations that were not possible before. 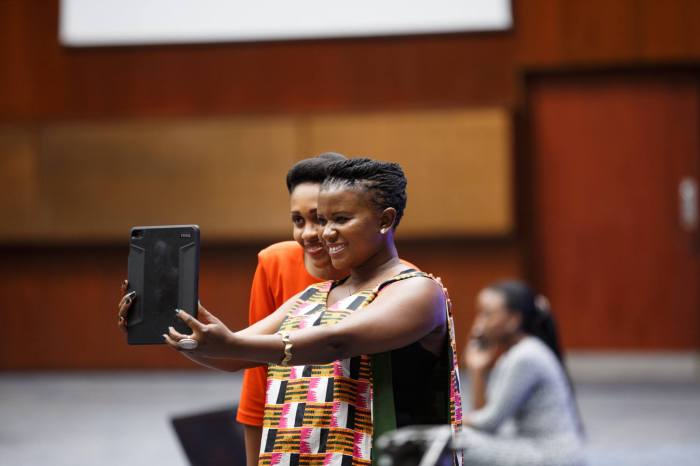 In the end this is the challenge that remains to bring more women in Uganda and the continent online. The gender gap when it comes to access to the  internet cannot be ignored.