Two weeks after the initial court hearing, the suspect was to stand for another trial on this morning. The “Ahun BeAyne Meta” campaign had made progress in garnering the attention of many sympathizers to the cause. As time pushed on further into the morning, droves of people began to assemble in the compound.

A truck stands in one corner of the compound. Attached to it is a rope; the other end tied to something else sturdy to hold in place a huge banner on which the statement “STOP the rising levels of Violence Against Women” is written. I inquire with the women surrounding it what it says before looking at it in the front. She proudly states the message and asks to hold it straight so I can take a picture. I’m proud that the banner was arranged for by the Bole Sub-city Women, Children and Youth Affairs Office. I’m proud that this very same office mobilized other women in the surrounding Woredas to come to the court house and raise their voice against VAW. Slowly more and more people begin to trickle in. 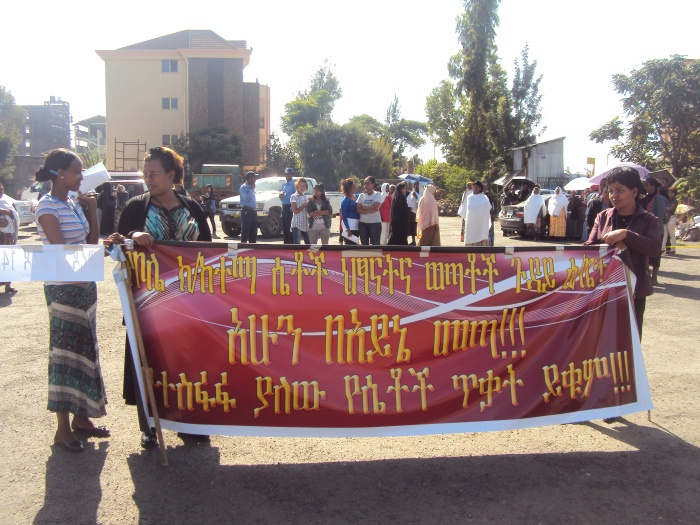 Black is the chosen attire. It seems that women and men from all segments of society made an appearance. As people begin to gather, Aberash’s uncle shares photos which show the injuries she has suffered. The pictures are gruesome. As people are shown these pictures, wails are heard, cries get louder, tears flow in sympathy for the woman who suffered this.

There is a delay in the start of the hearing as the suspect has not yet arrived. Still people continue to flow in. The entrance to the court room is jam packed as everyone wants to sit in on the hearing. Of course the room has its limits. Still more people gather in the court compound. I’m proud again. Now it’s with how the sub-city police are handling the influx of people. They’re calm, polite and accommodating.

The court room itself is packed to the limit. There are subtractions of people. There are additions. The court room attendees and police facilitate the interest people are showing to be able to remain inside even in the most uncomfortable position. A room that could comfortably hold only up to 20 people now houses up to around 60 or so. We’re asked to switch of our cell phones and adhere to court room rules. The shouts in the background are getting louder. In side however, we are told that court room rules dictate that interference in proceedings is punishable. Emotions however are high.

Short Video of the campaigners chants

After an extended delay we are made aware that the suspect has entered the compound upon hearing the screams and wails coming from those outside. It’s an intense moment inside as well but a silent one. The presiding judge Honorable Araya Hailemariam enters the room and soon after the suspect is brought in. The session begins with the judge inquiring as to why there was a delay, to which the lead investigative police of this case gave an account of the shortage of cars available. The investigator continued to explain the status of the investigation in that they were still awaiting on the medical reports from Bangkok to be sent to them in evaluating the severity of Aberash’s injuries, but that her life is at threat. Police also expressed that they have retrieved the weapon from the crime scene but are still in the process of collecting testimonies before presenting their full case. A request was made again to deny the suspect bail until police finish their investigation.

Judge Araya asked the defense if they had any statements to make, and both lawyers present requested for a speedy trial to be conducted. Furthermore, they requested that police present evidence that her life is at threat and that their investigation be quickened. The defense also stated that they have not been granted access to converse privately with their client and asked the judge to facilitate this process. Judge Araya ordered that the suspect be granted access to his lawyers.

The suspect was also given an opportunity to make a statement and he emphasized that he has not be able to talk freely with his lawyers. Additionally, he commented that he did not want to say anything until Aberash heals by the grace of God.

Asked if the defense wanted to make any other statement, one of the lawyers explained that media coverage has exploited a fair trial and is enabling public judgement before a legal judgement. Judge Araya was requested to make a ruling on public and media access to the proceedings, to which he reiterated that the case was an open case which meant that anyone with an interest in following-up was legally entitled to do so. With that police were given another two weeks to finalize their investigation and another court appointment for the morning of Tikemt 7 (October 18) was set.

The morning of the 4th was a very intense morning. There was so much in the air to absorb and when absorbed there is a related mental drain. The images provided by Aberash’s uncle were so horrendous that they’ve left a painful stamp on my psyche and i’m sure on those that have seen it. I battled in my head for days and conversed with friends on the prospects of sharing it, but the cons outweighed the pros much more. Despite one of my favorite sayings “believing is seeing” the pro in sharing would have attested to the other mainstream saying that “seeing is believing”. Images are powerful in conveying a message. However, for two reasons i decided not to share this picture:

1. Media sensationalism – sharing the picture would mean contributing towards media sensationalism where more people’s emotions are stirred momentarily, a hype is created and then it all withers away. My aim in this blog project is not to increase readership through sensational reporting.

2. Exploitation of Aberash – secondly, aiding a wider circulation of her photo showing her injuries i feel will be further exploiting her. Already i sense a growing pity for Aberash. Compassion okay. But pitying her only intensifies the pain. Many conversations i hear are already about how it would have been better if she had rather died than live with no sight. Who are we to pass judgement on what would have been better for her? For her family and those that love her, they are grateful that she is alive. I think it’s important to shift the paradigm of pitying towards creativity in victim support.

8 thoughts on “The Intensity of October 4th: Follow-up to Aberash Hailay’s case”